Today was Amalo’s birthday, we threw her a surprise with the girls near the weight room, and the boys hiding in the locker room. She was told the women’s locker had been infested. Land training was made of 7 stations; Burp..Burp..Burpees, Bleep Test, Wacky Jacks, Situation, Yoga Pose, 36.6m Dash (oddly specific distance, we know) and a lot more.

In the first part of the night, rookies watched the experienced paddlers train. In the second part, the rookies got into a boat. As with every first-ever practice, the rookies were all over the place because they did not know how to paddle. A little bit of adjustment was made, and they were filled with potential.

The vote was cast for the two competing captains for the week: James and Phil, with a challenge awaiting their respective teams.

Challenge #1: Challenge consists of boating etiquette, setting a balanced roster and a 2000m time-trial!
Which team will come out on top for the first TUBS challenge? 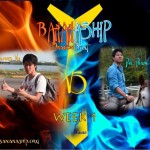