It’s PROMO TIME! The League flyers are out! We are starting to market the league everywhere.

Amalo and Samie went by CIBC to create a bank account… the lady was such a… No comment.

It was time for the Club Meeting! Concordia 7th Floor Hall Building. Everyone gathered around and discussed about our season goals. Ottawa has to be planned, Sarah, Lawrence, Sheldon, Xiao, Merica and Britt can drive. We’re set!

At the indoor pool, the vets did a good job helping the newcomers out. 7 new people came to try out. 3 of them, Guillaume, Edwards, John Kha were from the league and wanted to become more serious. Everyone was tested through a land training test, and boat training test. A rigorous evaluation with 12 variables including Technique, Fitness, Team Spirit and Attitude.

Amalo said Robert was a monster! oh boy.. Bucketman ended up agreeing to it as he was doing military push ups during the land training. Raymond spoke a little too much for the captains’ liking, although he was quite strong. He reminded us a lot of Pui-Tak and surprisingly this season, Pui Tak doesn’t talk as much anymore, he has become very serious and concentrated.

The captains gave their grades, and had a discussion. Congratulations, Robert, John Kha, Huy-Dang and Guillaume have been admitted. All other paddlers will have to go through a second evaluation to know whether we should accept them or not. They will have to train very hard and become very focused to make it. Will they be back for another try? Try-outs are in April. 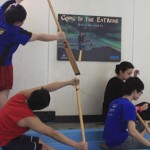 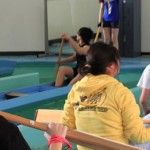