Going into the last day of racing, BananaShip was ranked first in both its mixed divisions, giving the club a good chance of producing a medal. Knowing that today was where all our effort counted, the intensity was thick in the air, and the club would face its stiffest competition yet against similarly timed teams.

Sunday morning were the 500 meters, and first up, the Extreme team. Extreme paddled as hard as they could, but could not place in medal standings. Whether it was overexcitement or exhaustion from two consecutive days of racing, they would have to refocus for their upcoming 250m, a distance that keeps competing teams side-by-side. The Competitive team after just watching the Extreme team’s efforts, were ready to bury yesterday’s mistakes and ploughed through with a strong second-place finish, nabbing BananaShip a Silver medal and our second of the festival.

Different strategies had to be drawn up for the 250m and ourstarts had to be perfect! Extreme was first to go again, renewed with vigour, the team dug deep pulling off one of the tightest finishes of the festival. It all came down to a photo-finish, despite missing another medal opportunity, everyone was proud of their effort. All boats competing differed from each other by mere milliseconds! The Competitive team was up next and like the Extreme team, a photo-finish was needed to determine the outcome. Luck was on our side as the Competitive team was awarded the Bronze medal – beating fourth place by only 1/100th of a second!

A great effort by our gender teams too! Although emphasis was on the Mixed teams today, they once again produced surprising results as our Men’s team nabbed fourth place – just 0.04 seconds away from medal contention. One thing is for sure, more time will be spent developing the gender teams next season. We have the raw talent.

And with the conclusion of this year’s Montreal International Dragon Boat Festival, we also conclude this season of BananaShip. It was by far our most successful season to-date, from being the Grand Prize Winner of SummerSplash in June to 3-time medalist at the Montreal Festival. A big congratulations to everyone who made this happen, paddlers & supporters alike.

The second day was a roller-coaster for everyone in BananaShip. The Extreme team placed into Rookie B, and high hopes were put on the Competitive team to place in the Premier division after a solid third place finish in their first heat. Yet after an unfortunate steering mishap in the second heat, fell short of the goal and into Intermediate B.

There was no time to lament on that loss, BananaShip had to wipe away the tears, and put their game faces once again because today was when we introduced to everybody our Phil’s Femmes Fatales and the return of Razor Lemon, our gender teams!

The Femmes Fatales did a fantastic showing producing second place finishes in both their heats. And our boys gave it their all despite going head-to-head with some of the very best men’s teams Montreal had to offer. For two boats who have trained just on two occasions, our gender teams were placed right smack in the middle with the boys in Open B, and girls in Women’s C at the end of the day. Very surprising, keep it up!

The first day of the Montreal Festival began with its share of bumps and hurdles. What was touted as the Student Cup: a large student competition bringing together over 20 teams, delivered just half that. In any case, both BananaShip crews were ready to head to the water and race. The Competitive team blasted their way through the heats, and clinched their spot in Final A to race among the top student teams at the Festival. And did they deliver; producing BananaShip’s first medal of the weekend: Bronze with a 200$ cash prize. The Extreme team initially had a rough start due to missing seats and relative inexperience at such a big event. But they persevered, nabbing First Place in Final C, even managing to beat the Competitive team’s best time of the day by 2 seconds! Great start BananaShip! Tomorrow will be even much tougher with over 100 teams to beat. 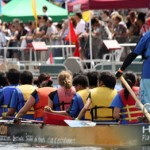 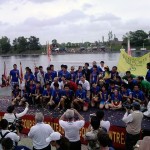 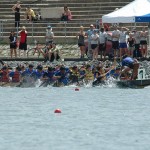 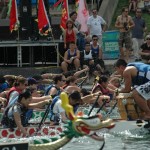 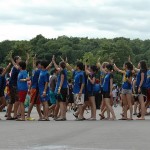 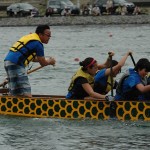 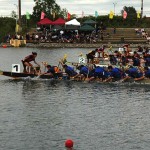 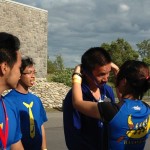 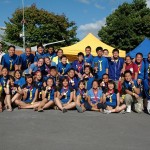